↓ Skip to Main Content
Home › celebrations › When you’re a quilter, how do you celebrate a milestone anniversary?

When you’re a quilter, how do you celebrate a milestone anniversary?

PatchPearlPosted on July 16, 2013 Posted in celebrations, values — No Comments ↓

Well, last week I was able to tell you all about the biggest quilt I had worked on last year, which was Lake Shore Magic.  A lot of energy behind the scenes went into getting that quilt into Quilty, but it certainly wasn’t the only biggie quilt I worked on last year.  The second quilt was a labor of love for my husband – somehow last winter I realized I had never made him a quilt of his own.

We celebrated our 35th anniversary last month – and yes, I was very young when we were married.  Truthfully, that realization hit me when I was sitting at a guild meeting talking with some friends, many of whom had made at least one quilt for their partner.  I was chagrined to say the least, and I got to work on it right after the holidays.

Picking out the quilt design was actually a very easy- many of you will recognize the finished quilt (above) as a Carpenter’s Star pattern. Mike has always enjoyed woodworking, and has in fact made every one of the quilt racks which hang in our home. This was a natural fit, and several of the batik fabrics in it are special to him.  His birthday is in October, and I actually found batik pumpkins at one of the last trips I took to Keepake Quilting. 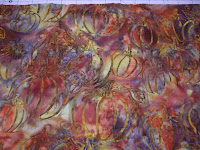 For those of you who doubt the old ‘wives’ tale that you should buy it when you see it – I SOO wish I had more of this left to play with.

This quilt was made as a secret to Mike – beginning in January, with our actual anniversary at the beginning of June.  Mike’s semi-retired, and he’s pretty tuned into the pieces I’m working on…so the secret part of this became more of a challenge than I originally thought. It’s good that we had a major home renovation going on at the same time to distract him; the bad news is that drywall dust is never an embellishment option.   Fortunately, I had a couple of retreats this past winter – this ‘surprise’ was well traveled before I gave it to him. 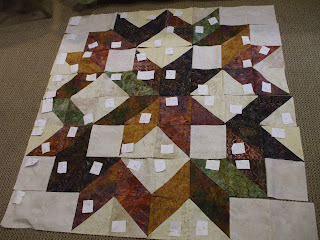 This was the layout of the quilt on the floor before I sewed anything together; in this pattern, there is one right location for each piece of the 64 piece puzzle.  The tags were removed once I had actually sewn the entire star together.  I’ve never done a pattern like this, but I’m sure happy that I had a chance to work on this in peace and quiet over two weekends.

This quilt is special to me because although this is a queen sized quilt (with borders added), I rented time with a local shop on their longarm machine, and I actually did the quilting myself.  I learned a lot about the longarm process (which was a by-product of the experience), and I could happily give him something that was truly made by me.  It’s nice (after all these years) to actually sleep under a quilt I made.

The name Patience and Kindness comes from two of the qualities that I first fell in love with him for.

Welcome to onequiltingcircle, my home for creative people on the web. I'm a quilter, a speaker, a teacher...and someone who enjoys hanging out with other creative forces of nature. Let's play!